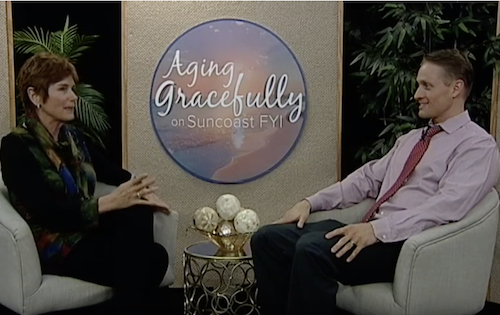 This is the third in a series of interviews with Dr. Adam Still on SNN’s show, Aging Gracefully on the Suncoast with Nancy O’Neil.  Our topic is dental implants. If you are thinking about getting dental implants there’s a lot you need to know!

How long have dental implants been around? The technology involved with placing implants has been around for 40 plus years but it’s becoming more and more mainstream and we are seeing it as the number one go-to option for missing teeth.

So what are dental implants? In a situation where someone loses a tooth, whether from decay or fracture or gum disease, a dental implant is an option…once we take the tooth out, we place an implant. Then we install what you can think of as a titanium screw into the bone, which replaces the root of the lost tooth. From that artificial root, we are able to anchor materials on top of it so we can then restore the space with a crown for example. This gives you a tooth that looks and feels natural in that empty space.

Why would you recommend an implant over some other procedure? There certainly are other options besides an implant. One option for example, would be to place a ‘fixed’ bridge.  In order to do a bridge, we would prepare the teeth on either side of the space where the tooth was lost and then cement bridge in. Think of it as three crowns in a row that are linked together, cemented onto those two abutments. You have a prosthetic tooth in the middle that fills in the space. Another option would be to have a removable appliance like a partial denture. This is made of acrylic and metal and it would have clips which anchor to some of the remaining teeth and fill the space left by the missing tooth. It would be removable by the patient. So as you can see, there are several reasons why dental implants are a better choice in most cases.

When would you recommend and implant? You would use an implant in a case when you want to replace the tooth in the missing space and you don’t want a removable appliance and you don’t want to involve the adjacent teeth. When you are doing a bridge have to you prepare the tooth on either side for a crown as previously described. This means you take the outer layer off the tooth structure off on each adjacent tooth. With an implant, you can be more conservative with tooth structure because you don’t touch the teeth on either side – we are just restoring the space by itself. It also a huge advantage if you don’t want something you have to take in and out. So the alternatives are a bridge which impacts two other teeth that don’t have something wrong or you use something removable.

What are the advantages and disadvantages to implants? As far as advantages, there is the conservation of tooth structure as we just discussed. Another thing I like about implants is cleansability. When we are connecting multiple teeth with a bridge, it makes it harder to clean around and under it. With an implant, it’s more like a natural tooth – you can brush and floss on each side…more of a natural feel. Another thing I like about implants is that they conserve the bone in that area. If we take a tooth out and we -place either a removable appliance or a bridge over it, the bone around the extraction side will resorb down and you will actually lose more jawbone in that area. When an implant is placed, you will actually retain bone in that area.

We’ve been talking about a small space – a single implant – what else can be done with implants? Implant dentistry is by no means is limited to small spaces. It can be used in a myriad of applications. Some of my favorite ones are when we are replacing an entire mouth of lost teeth, whether it be all your upper and lower teeth or just the upper or just the lower teeth. In those cases, we can place multiple implants and we can create a prosthesis that will restore all of the teeth. Another one of my favorite things regards a patient who has been wearing full dentures for many years, using adhesive and is just so sick of using multiple products to try to chew normally. If we place implants, we can fabricate a denture that can actually clip onto those implants and get retention from that. In this case, the patient will have to take the appliance in and out at their discretion but it’s more comfortable and stable. Another option that is similar to that is that if you have a patient who doesn’t want to have a removable denture any longer, we can place multiple implants and fabricate a much smaller version of the denture that will actually screw into the implants so it stays in permanently. It stays permanently and they are able to clean around it. It’s a lot more comfortable and feels more natural because we can take away a lot of that acrylic material that they are used to having in the roof of the mouth.

One final question – what kind of time involved with implants? That’s one of the drawbacks. When a tooth is taken out, first there will be a bone graft that has to heal for a few months.  Then the implant will be placed in the jawbone and the bone has to heal around it, which a another few months. So there’s a longer treatment period but the end result is well worth it.

Smile Sarasota thanks Nancy and SNN for having Dr. Still on the show and allowing him to share all the new things in the world of dentistry. If you have any questions about the procedures he described here and on the other interviews, don’t hesitate to call Smile Sarasota and he will be happy to sit down and chat with you!

Oral Health & Dexterity As We Age
Scroll to top