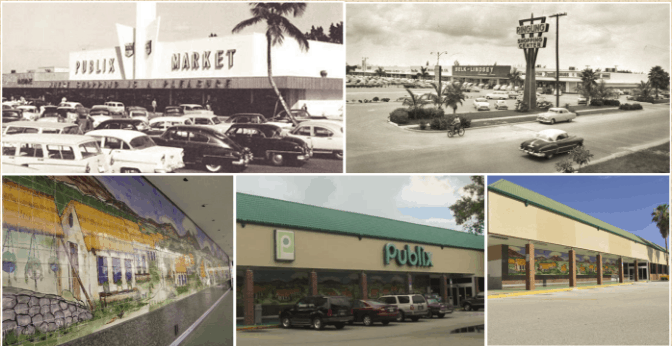 As most of you know, many of the staff at Smile Sarasota has lived in Sarasota for many years, and our dental office has been at its downtown Sarasota location at Ringling Boulevard for almost 25 years. This area has seen many changes over the decades. For a very long time, we used to shop at the Publix and eat lunch at the restaurants across the street at the Ringling Shopping Center. For now, at least we can still park under a tree and ‘brown bag it’ in the parking lot. It’s a little sad for those of us who remember the good ‘ol days.

By the end of the 1950’s, Sarasota shoppers had two major shopping centers to take their business to. The second shopping center, South Gate, opened in 1957, commerce shifted away from downtown and the once lively downtown area went into a downward spiral.  Except for some cosmetic upgrades and changes in the stores though, the Ringling Shopping Center remained as is had always been until 2010. Publix moved to it’s Tamiami Trail location in the former Sarasota Herald Tribune Building and tentative plans were made to open a neighborhood Walmart at the old Ringling Shopping Center location. Those plans were rejected in 2013 and our little shopping center is now mostly vacant. But the good news is that the Sarasota Downtown has revived into a very vibrant destination to live, work and play. As for the Ringling Shopping Center, we still enjoy our bag lunches and our happy memories of times gone by. Maybe someday that little former gem of a shopping center will be revived. In the meantime, Smile Sarasota is going strong serving downtown Sarasota and will celebrate 25 years this year.